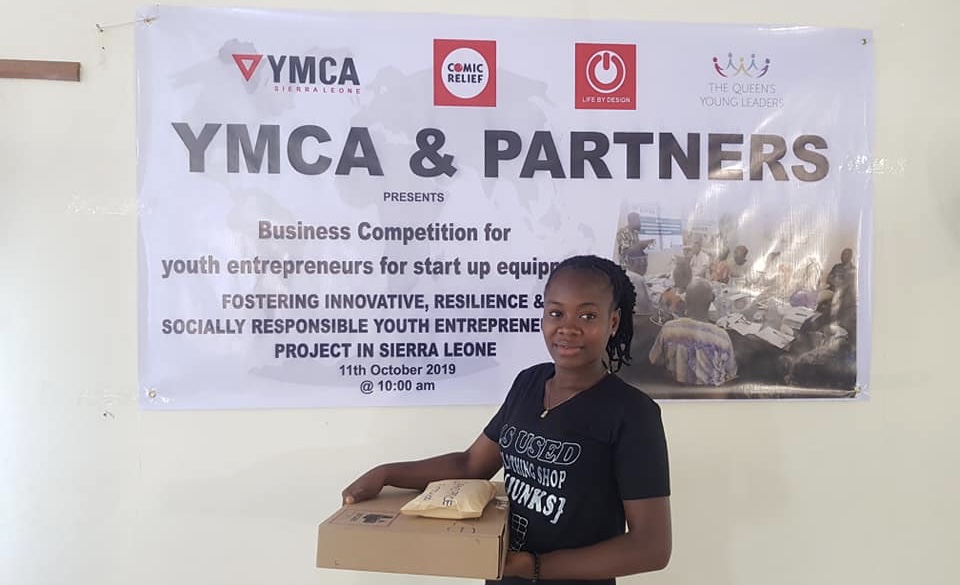 The Young Men’s Christian Association (YMCA) Sierra Leone and partners have on Friday, 11th October 2019 awarded prizes to youth entrepreneurs during a Business competition for start-up equipment which took place at the YMCA Hall in Freetown.
The event which was the culmination of a three-year intense training on entrepreneurship received from the YMCA through #LifeByDesign gave the opportunity to young people to pitch their business ideas.

During the pitching of their business ideas, Isatu Koroma whose business model was on used clothing emerged the winner of the competition and took home the star prize of a brand new Dell Laptop and a cash prize of Two Million Five Hundred Thousand Leones (Le.2.500,000).
The runner up took home Three Million Leones (Le.3,000,000), whilst the winner of third position took home Two Million Five hundred thousand leones (Le.2.500,000) plus other consolation prizes to the fourth and fifth positions respectively
Joseph Kange, the Project Manager for the Queens Young Leaders Project for YMCA Sierra Leone noted that the project which comes to an end in December 2019 has had a great impact on the lives of 930 young people across Freetown, Pujehun and Makeni. Joseph also stated that the YMCA has enjoyed tremendous support from partners including the local councils and the Ministry of Youth Affairs.
“The event is a testament to the fact that young people have done so well and are here to pitch their business ideas” he concluded
Joe Abass Bangura, founder of #LifeByDesign expressed his satisfaction for what they have been able to achieve together with YMCA. He called on young people to embrace the path of entrepreneurship and make the most of what they have been taught in the past three years as entrepreneurship is a new way to go.